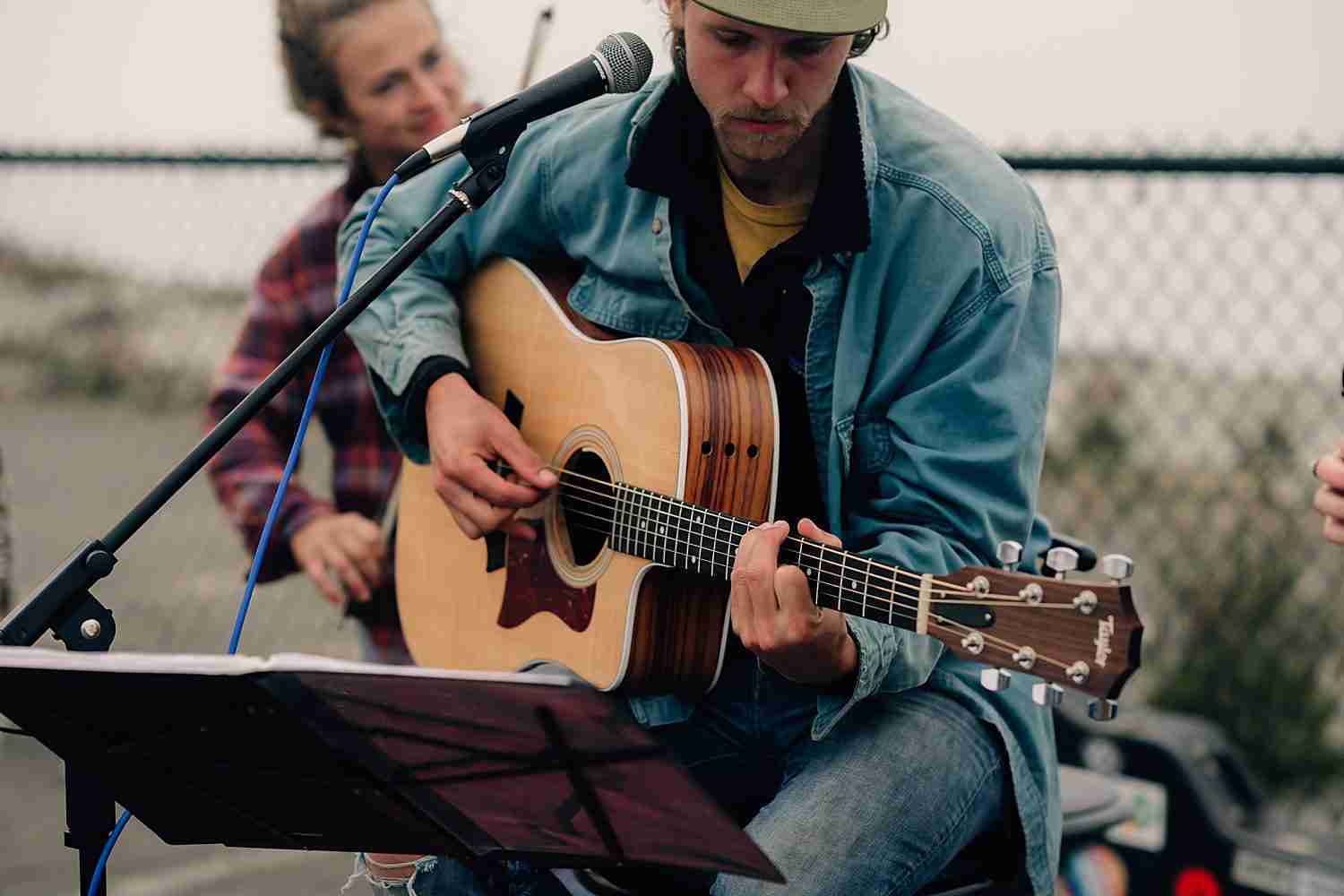 My husband and I recently bought a used RV and we’re beginning to explore the area in our home away from home. Last week we spent a few days at San Francisco RV Resort in Pacifica. It was amazing. We had an end spot overlooking the ocean. The weather couldn’t have been better and even the wildlife cooperated, with several humpback whales frolicking in the waves just offshore. 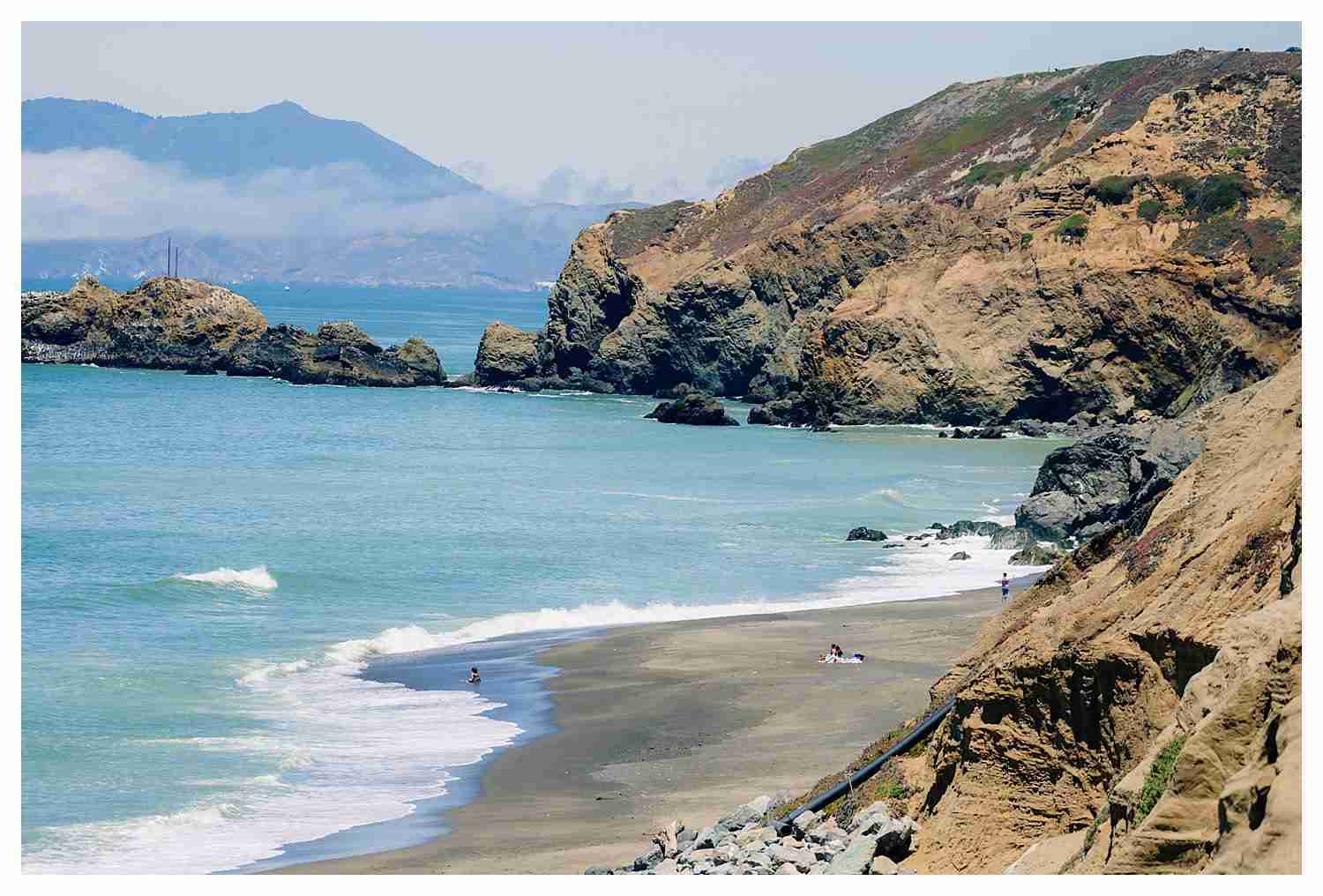 We found an amazing Mexican restaurant, Taqueria la Mordida, and an Italian bakery that will blow you away, Mazzetti’s Bakery. I highly recommend both if you’re in the area. You can’t miss the carnitas and the ricotta cheesecake! (And the red velvet cupcakes!)

I could talk about food forever, but I digress. I actually want to tell you about an amazing group of musicians that we met. Granted, we were on our way to the bakery (for the second day in a row) when we discovered them. The group was performing outside a small cafe and we stopped to listen. I love music and several of my stranger blogs have focused on street musicians.

Boy was I blown away with this group. There were five 20 somethings singing and playing original music and it was obvious that they were a talented group. After they finished, they announced they would be performing again that evening……at the very RV park where we were staying. What better way to spend our last evening than with a concert overlooking the ocean. I knew right away that I wanted to learn more about them so I grabbed my camera, my chair, and my lemon drop martini. 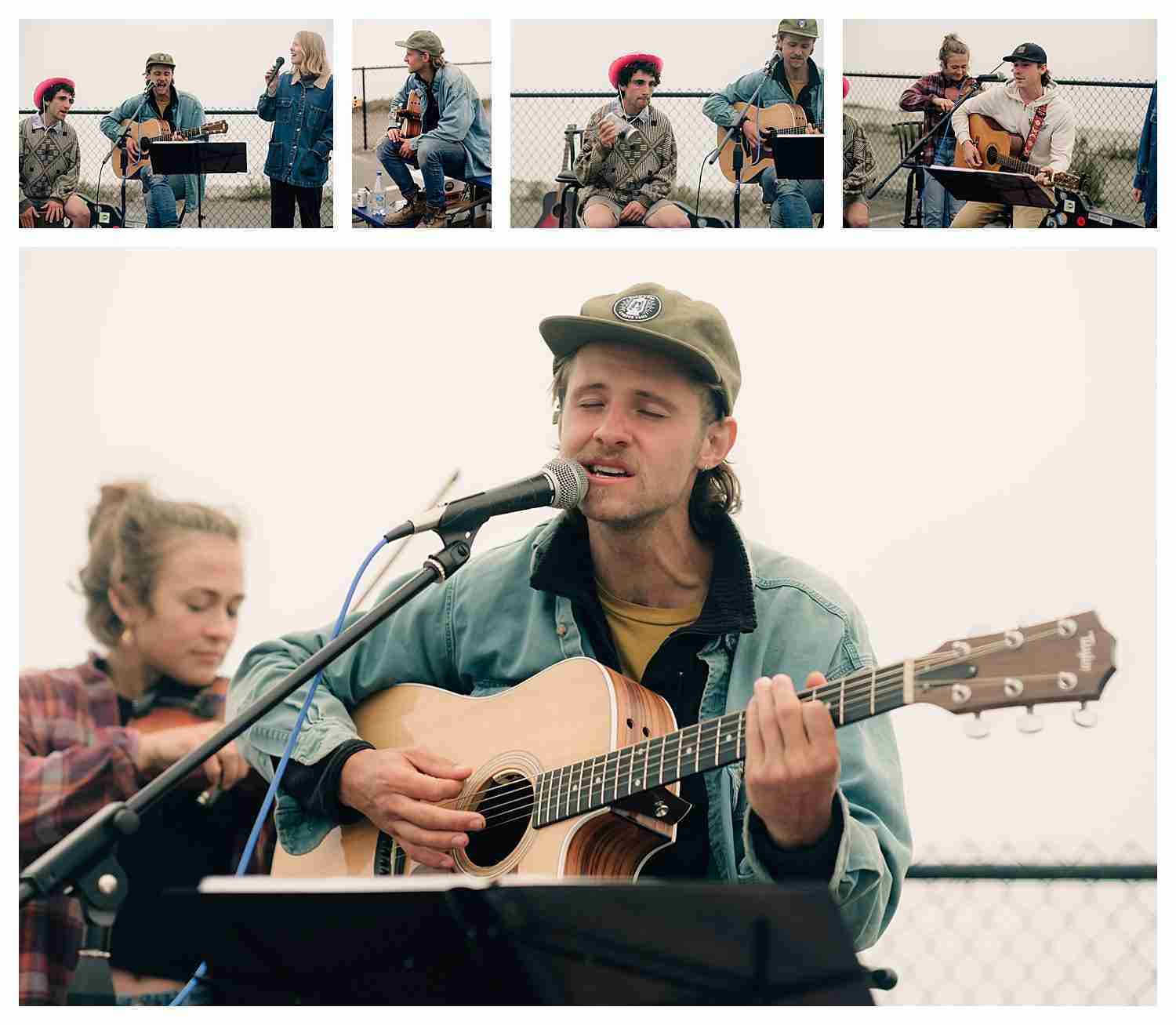 As they started setting up for the evening performance, I struck up a conversation with the violinist. Mary is an outstanding musician and singer, but she’s also a kindred soul. I found out that she’s a traveling ICU nurse. She grew up in Arkansas and you can still hear her southern accent. She’s currently on assignment in Modesto but will be moving on to Washington soon. She’s been playing violin since she was young. She’s also a climber, which is how the group came together. She works 6 days on, 8 days off. On her off days, she meets up with the group to climb and sing. The group calls themselves The Micklers Band. I asked about the name and Mary explained that it was actually her last name. They just liked how it sounded and decided to run with it. 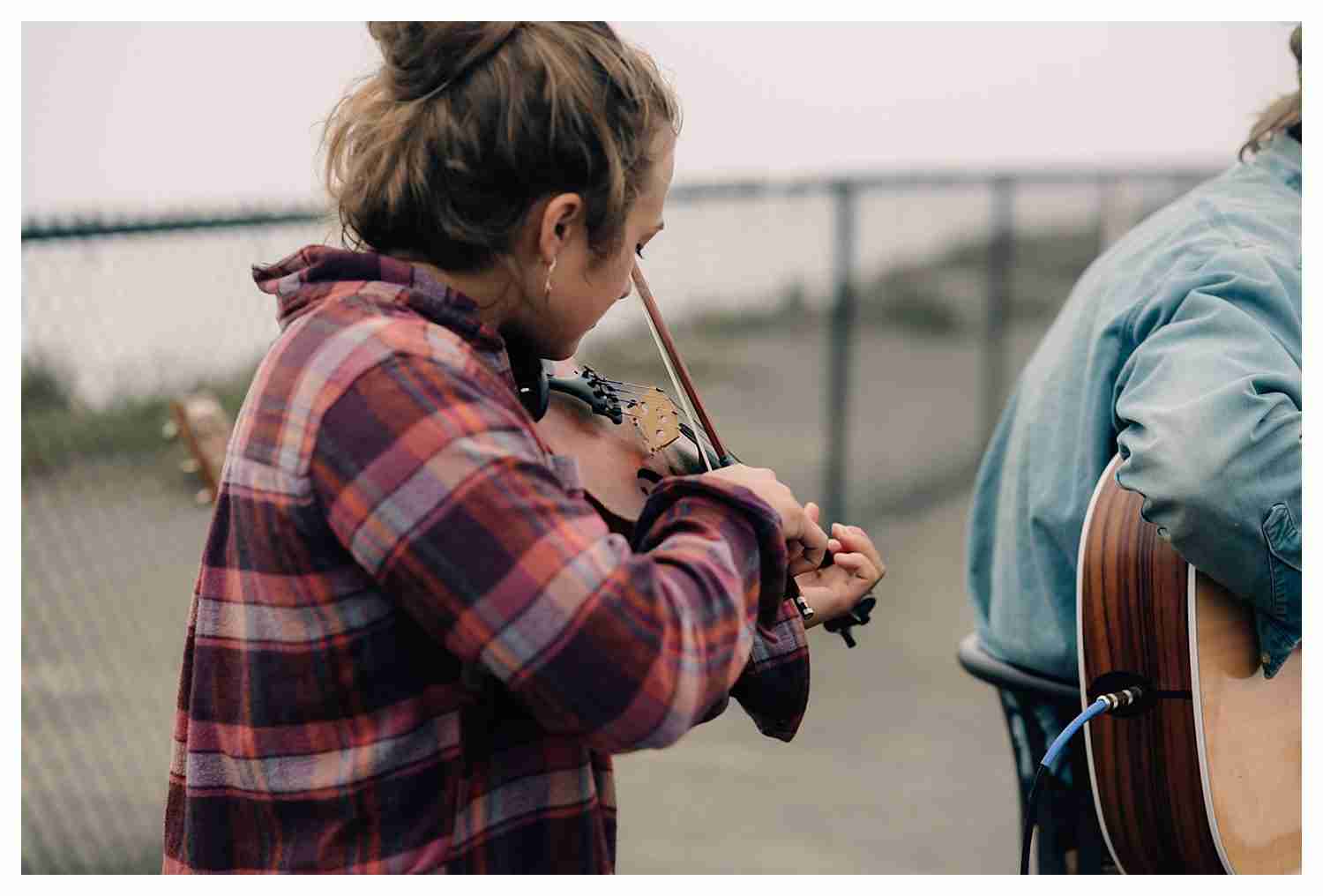 Kacie grew up in Pacifica. She plays guitar and sings, and has been performing for years. She’s a teacher aide, working with special needs students, while she finishes her Master’s degree to become a teacher. And yes, she’s a climber as well. 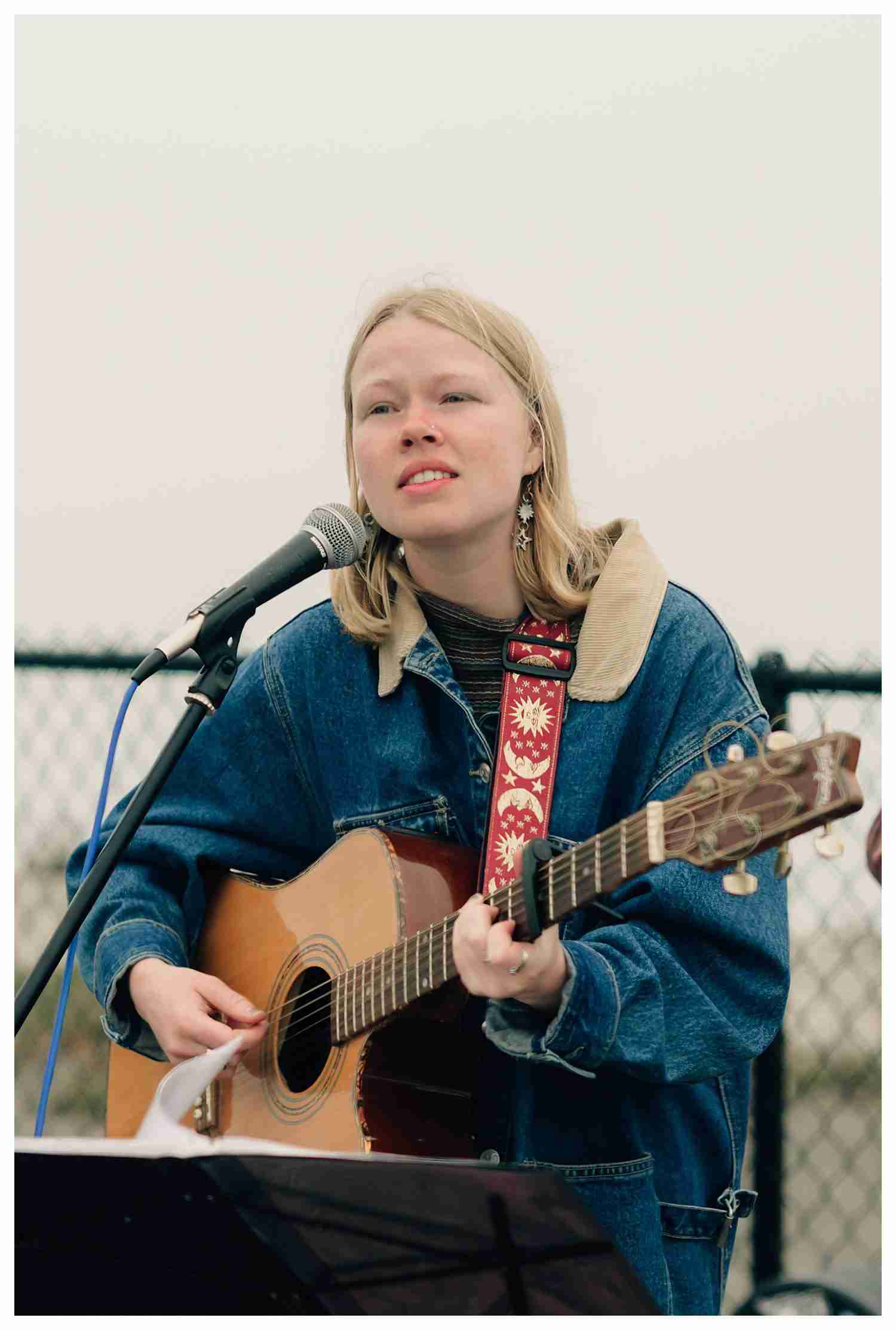 Travis is from Rhode Island. He was playing a Cajón, a percussion box that originated in Peru. He also played a mean shaker, made from a mason jar and dried beans. And oh yeah, he also climbs, sings, and writes songs! I told you this was a talented group. He sang and rapped an original song, Cigarettes. 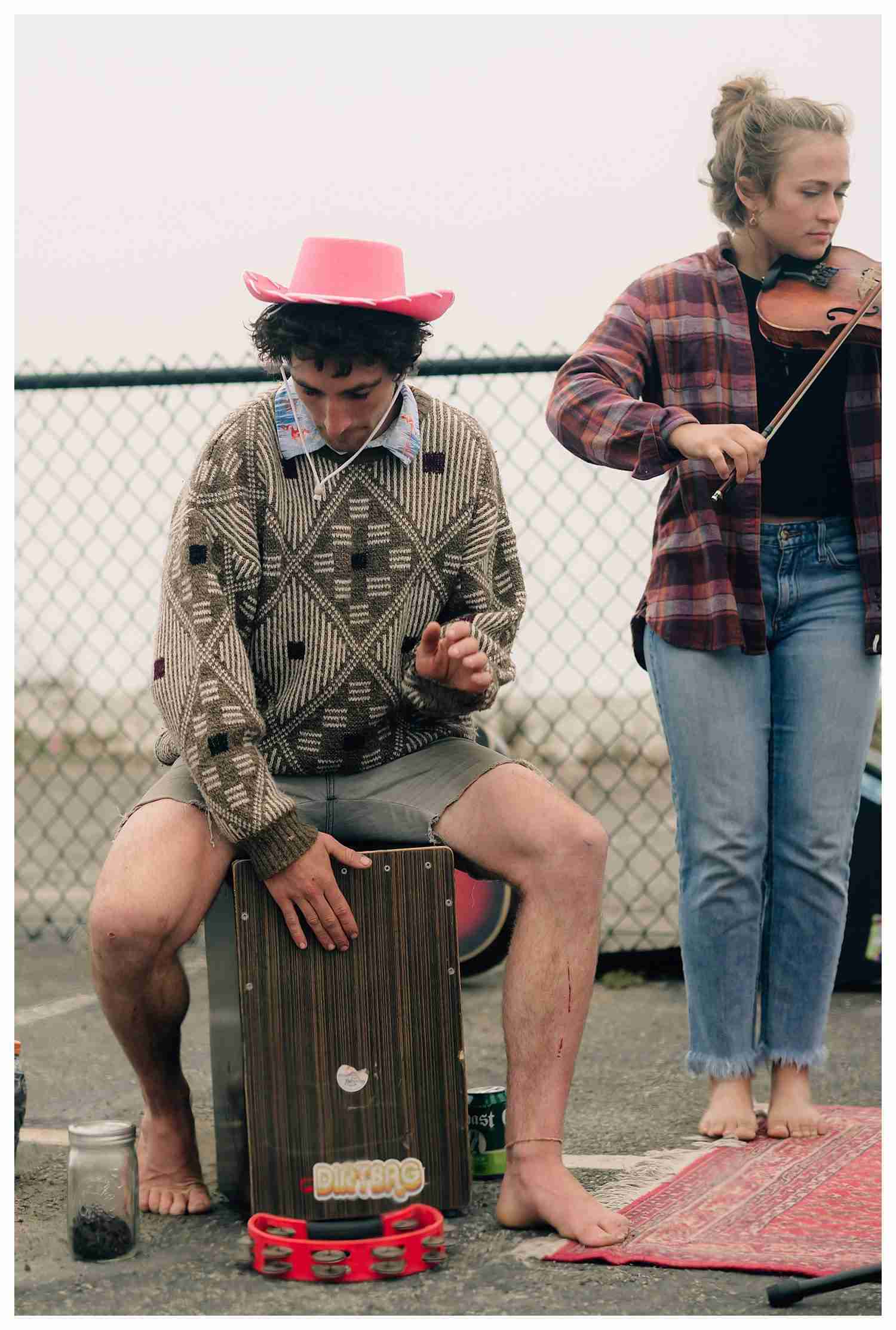 Matt was the only non-climber in the group. He was on bass guitar. He grew up in Pacifica and has known Kacie and Liam since middle school and was in marching band with Liam. That evening’s performance was his first time playing with the group, but you would have never known, they performed so well together. 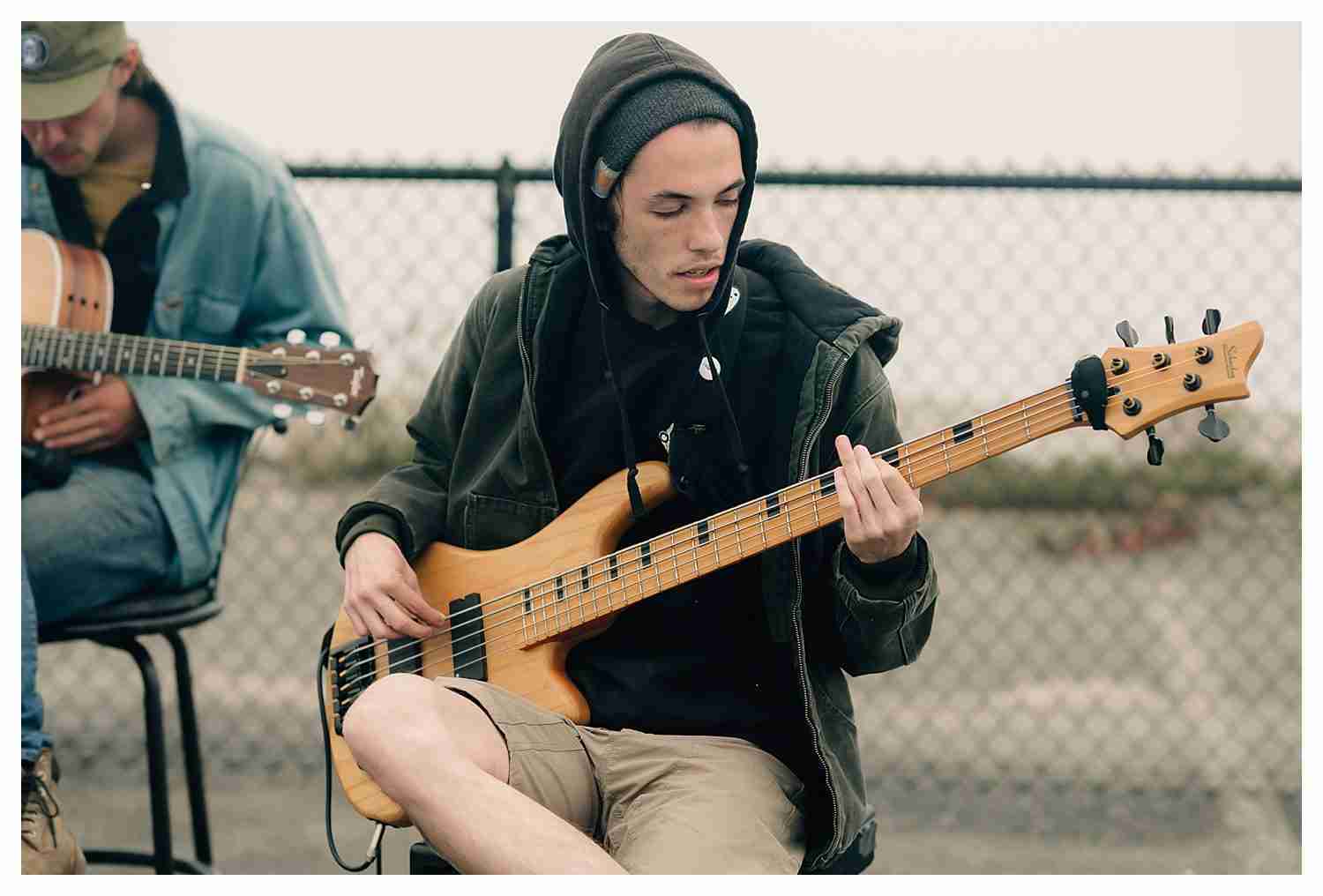 The lead vocalist and guitarist is Brice. My husband compared him to a young Kurt Cobain. He performed all original music with such emotion and passion. It was amazing to watch. Brice grew up in the Central Valley. I guessed that he had been playing since he was young, so I was surprised to find out that he started singing and playing when he was 18. He told me that he had the typical teenage angst and music allowed him to express it. He spent the last 6 years in Washington, and only recently returned to California. He has a degree in Biblical Studies from Moody Bible Institute. He also shared that he met a girl in college, got married, and then got un-married. Many of his songs were about that experience. He also sang a song dedicated to his sister, about standing by her when she needed him. Oh, don’t forget, he’s also a climber. 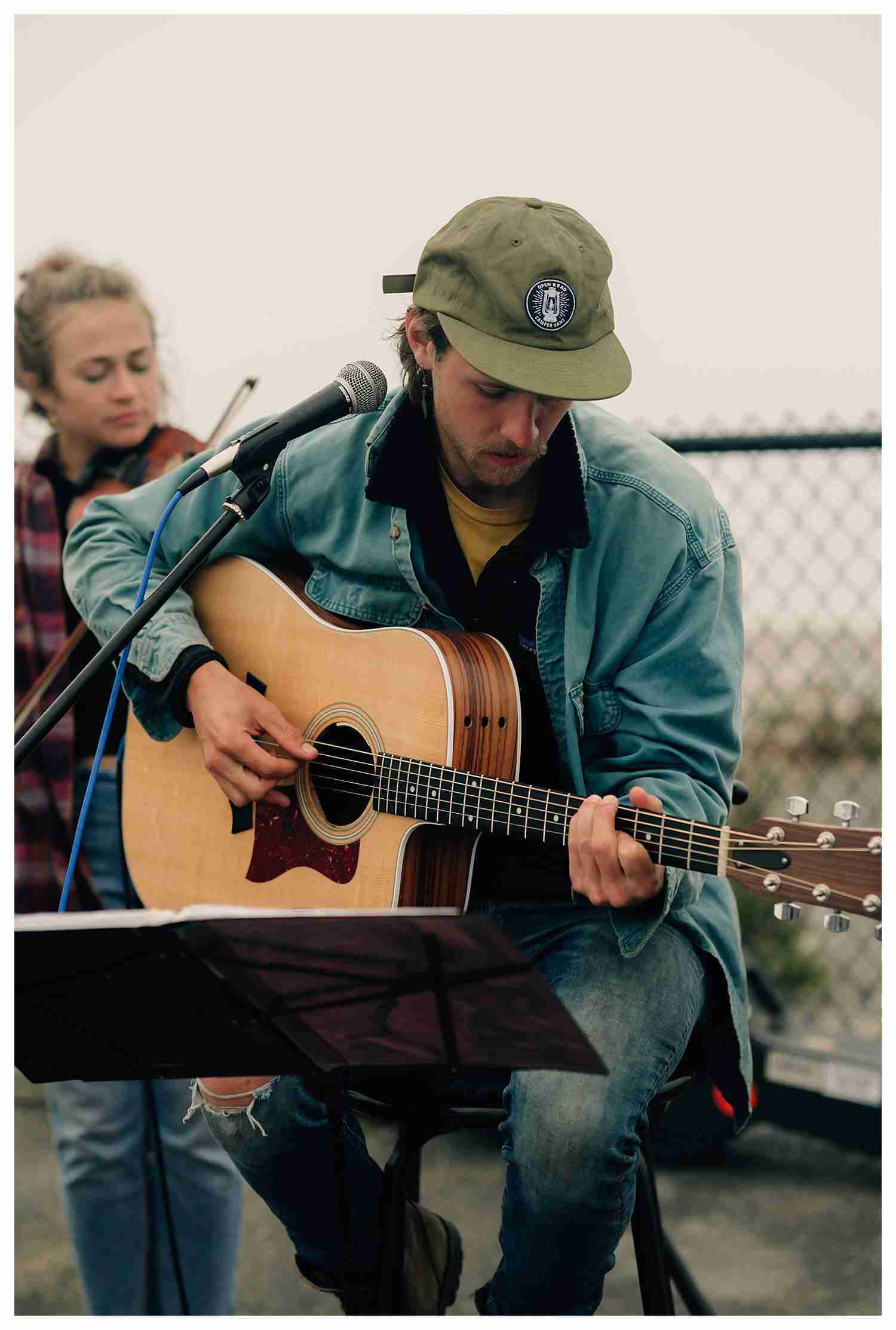 And then there was Liam. When I first started chatting with Mary and asked how everyone met, she said they all met through Liam. Kacie’s boyfriend told me she knew everyone through Liam. His name was mentioned several more times, so I was excited when Liam finally showed up. While he wasn’t performing with the group, it soon became apparent that Liam was also a very talented musician (and climber). He sang and played several original songs. Liam grew up in Pacifica and has a degree from SF State in History Education. One day wants to teach History, but he’s content for now doing what he loves. He’s classically trained on piano, plays the clarinet, and taught himself to play guitar! 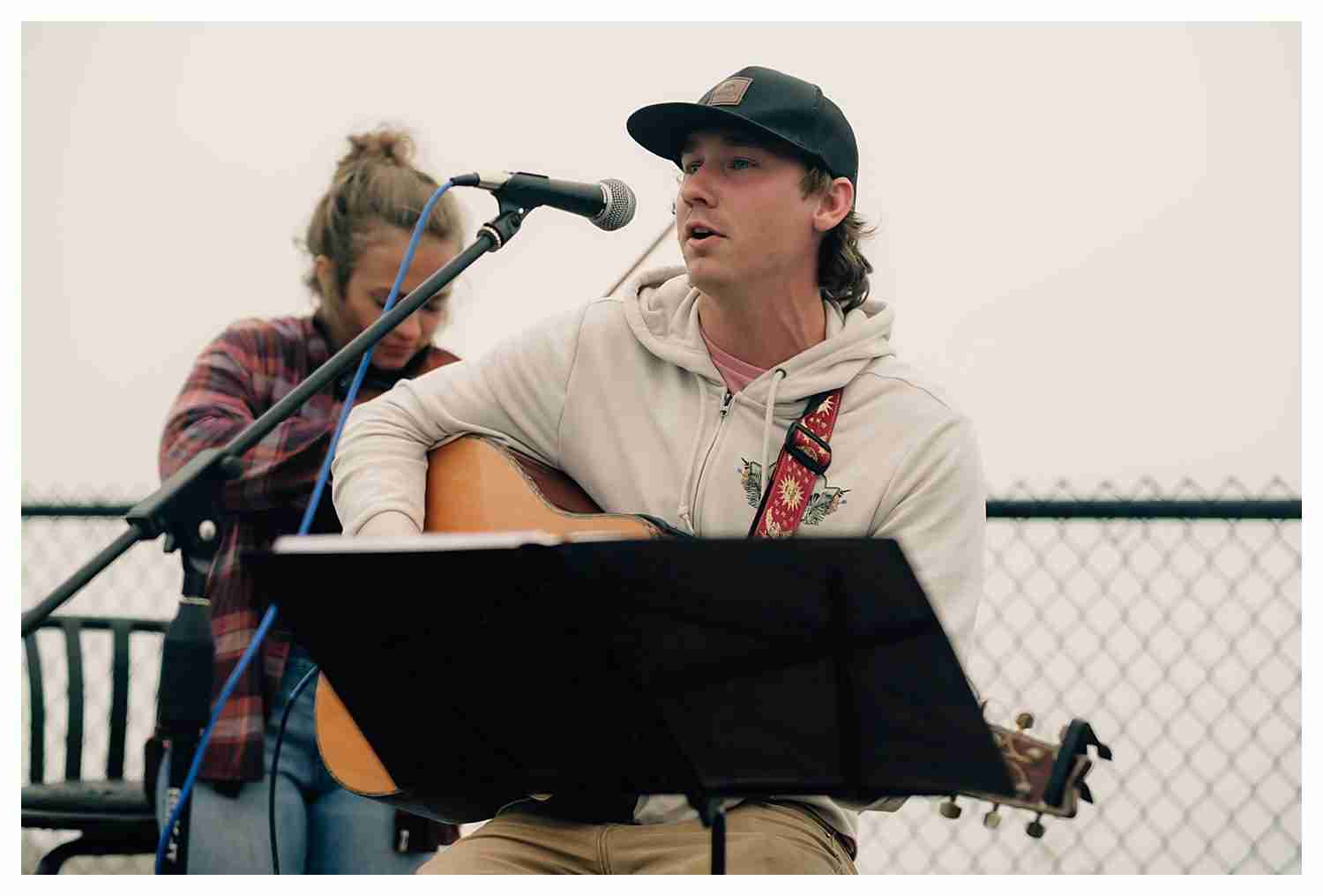 So here’s the story of how they met. Liam was climbing in Joshua Tree. One night, sitting around the fire playing guitar, he met Mary, who mentioned that she played violin. He told me he later learned she PLAYED the violin! He was blown away by how good she was. Anyway, keep up, Liam grew up with Kacie, Travis, and Matt, and met Mary at Joshua Tree. He met Brice at Yosemite and once he heard him perform, he knew he had to connect everyone together. It turns out that they’ve been playing around the campfire, but that day was the first time they performed together in front of others. 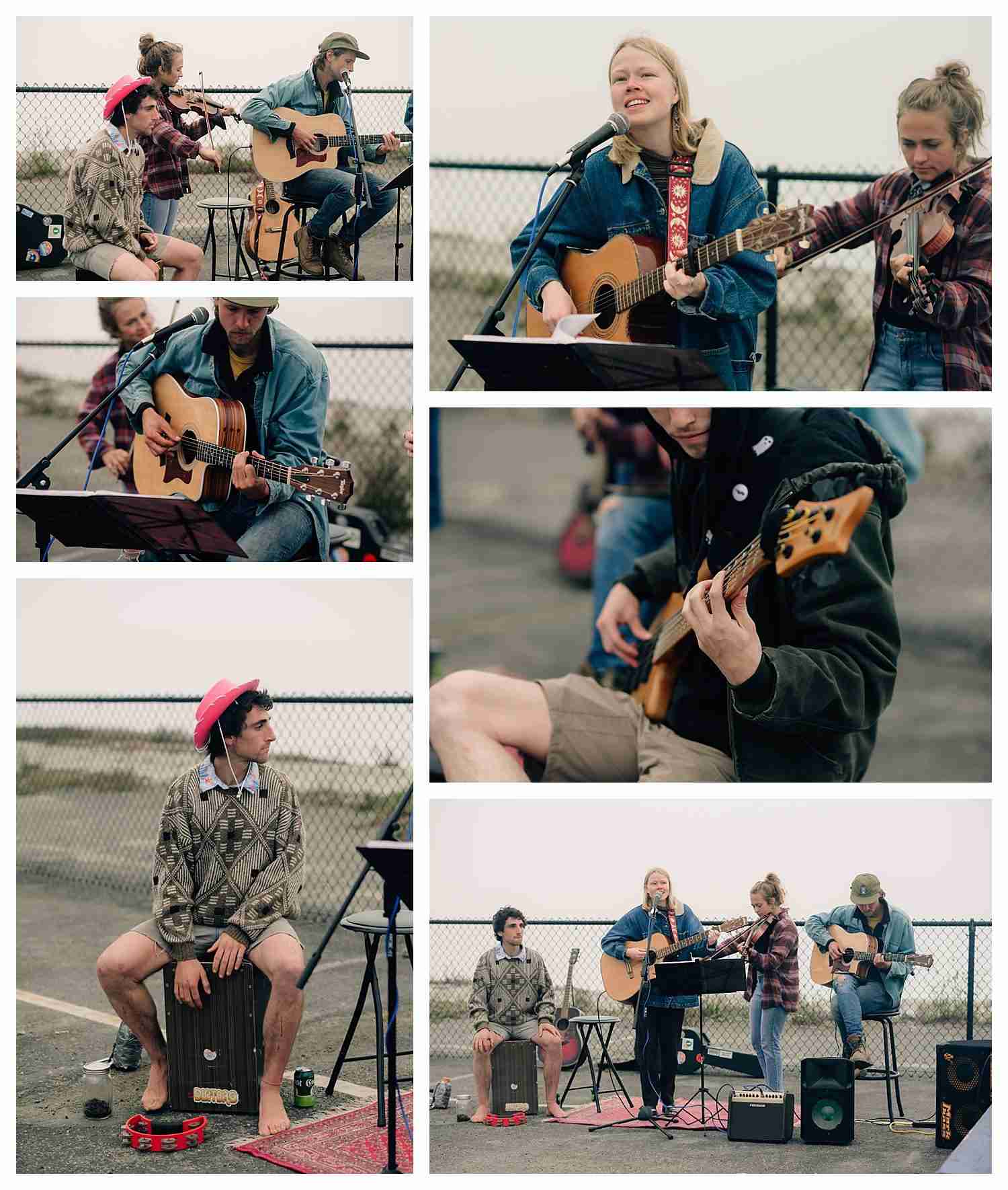 They played for over 2 hours as the sun went down and we all huddled around the fire to keep warm. They were every bit as good as groups you hear on the radio, and it was one of the best concerts that I’ve been to! 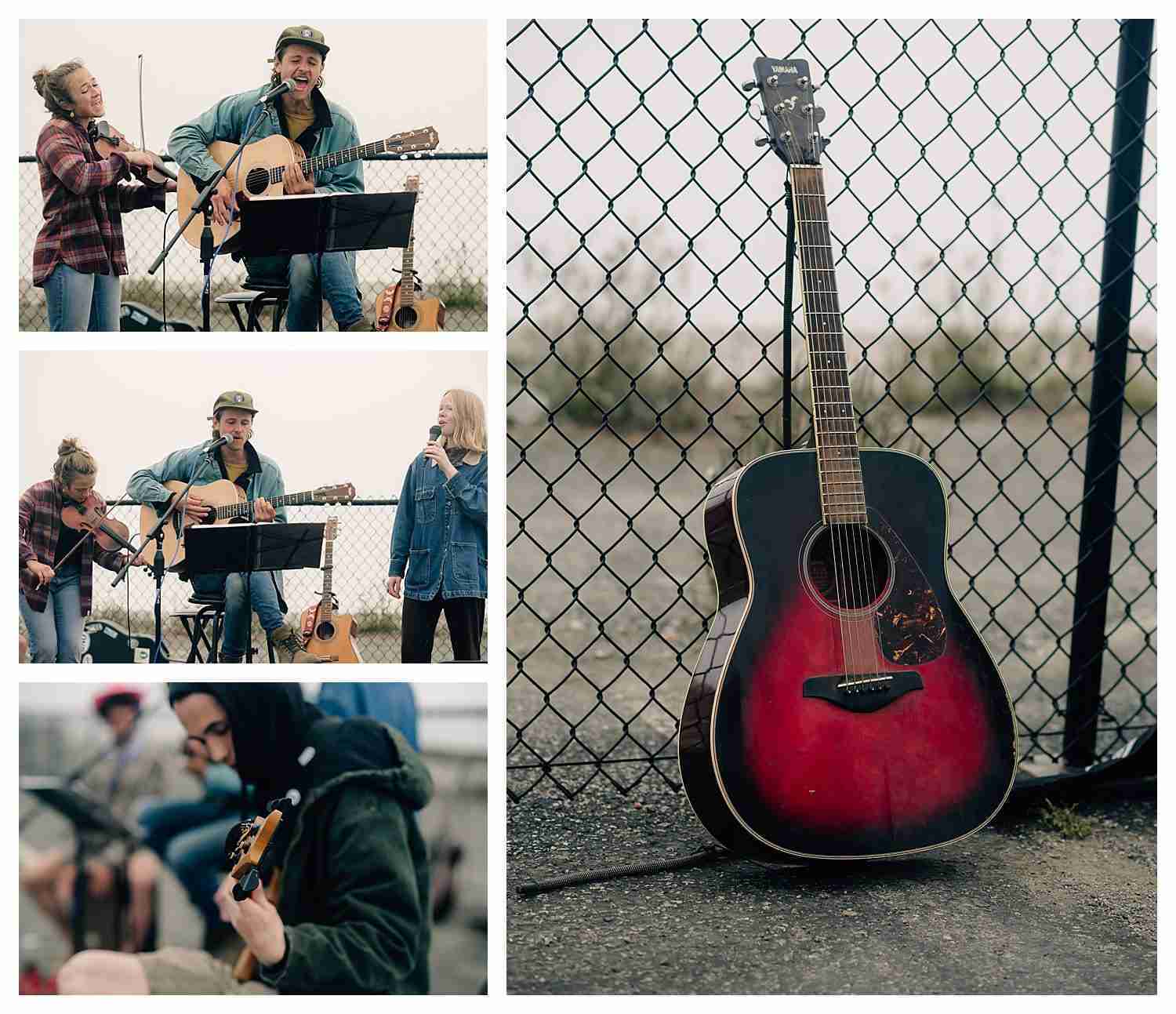 Don’t forget to check back to see who I meet next!